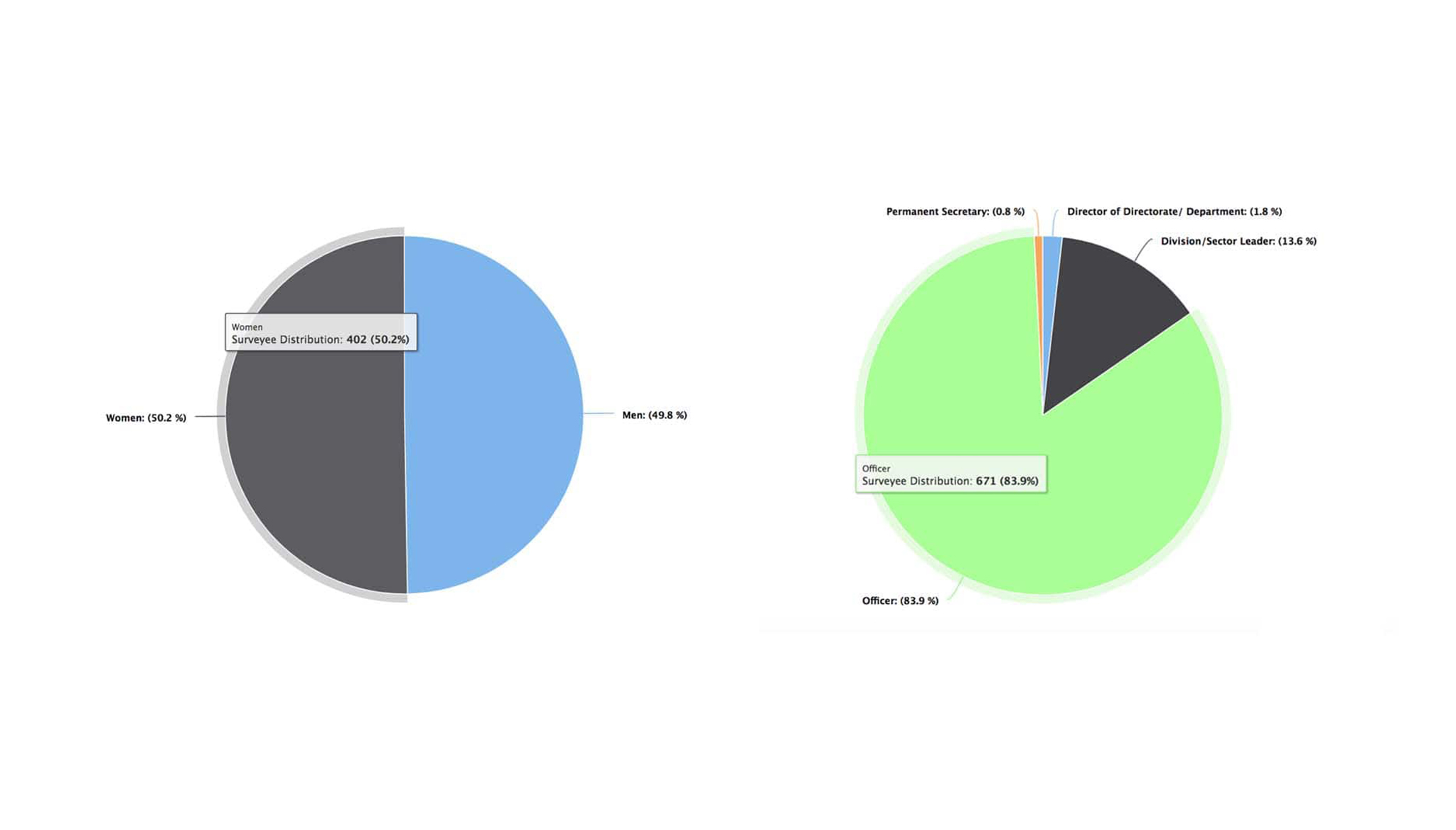 The UNDP report was based on the findings of a survey and followed closely on the heels of a discussion paper released by the Organization for Security and Co-operation in Europe (OSCE) – Women’s Representation in Senior Decision-making Positions of Independent Institutions in Kosovo[2]. Both papers address the low level of women in senior positions, but the UNDP report is more expansive. There are two high level themes running through the UNDP report:

These themes are nicely summarized in the following quotes from the report (emphasis mine):

“Discriminatory practices against women in Kosovo are present at all levels reflected also in the level of representation of women in Kosovo civil service. Among Kosovo’s 70,326 public employees, there are 38% women and 62% men. Women comprise only 9.5% of high decision making positions such as Secretary Generals and Chief Executive, and 23.2% are in some other mid-level decision-making positions. This situation may influence their willingness to report or become part of structures that might actively fight corruption.”

“Several econometric contributions claimed that there is indeed a link between higher representation of women in institutions and lower levels of corruption. An influential study of 150 countries in Europe, Africa and Asia by the World Bank, for example, came to the conclusion that women are more trust-worthy and less prone to corruption, a finding later corroborated by additional research from the World Bank.”

At a high level, the gender split of the respondents is not representative – with 50% of the respondents being women, they are over represented when compared to the general civil service population (approximately 40%). However, given the survey’s aim was at least partly to identify gender inequality issues, it is probably appropriate that they interviewed as many women as men.

It should also be noted that the rate of female employment in the Kosovo Civil Service is significantly higher than the general female participation rate in Kosovo, which stands at just above 20% (compared to over 60% for men). In addition, the unemployment rate for women in Kosovo was 38.8% in 2013[4]. Combining these two numbers you are left with around 13% of women in Kosovo being reported as officially employed.

In terms of position within these organizations, the vast majority of respondents (83.9%) were employed at the Officer level, with the remainder made up of permanent secretaries, and directors (see Chart 1 for details). This means the survey was heavily skewed towards lower level employees, which is likely to be somewhat representative of the structure of a hierarchical organization.

Overall, although the survey appears to have been structured to capture the views of a wide variety of people within the Kosovo Civil Service, it does not appear to have been constructed in such a way as to be considered a ‘representative sample’. This does not mean the results are meaningless, just that the results cannot reasonably be assumed to be representative of the entire Kosovo Civil Service. When drawing conclusions from this data, this fact, as well as the relatively small sample size, needs to be considered.

A full breakdown of the survey respondents can be seen at the Open Data Kosovo website. These visualizations were put together during a workshop with Girls Coding Kosova (GCK) organized by Open Data Kosovo and UNDP. This workshop was designed to help engage young women in tech to use their skills in analyzing data and finding interesting ways to visualize the information.

The first thing that should be noted is that only 126 (15.8%) of the total 800 respondents reported either witnessing or being asked to participate in corruption (or both). This percentage was slightly lower than the numbers reported in similar work done in Ukraine and Albania[5].

Chart 2 and Table 1 provide breakdowns of the population who reported witnessing or being asked to participate in corruption. 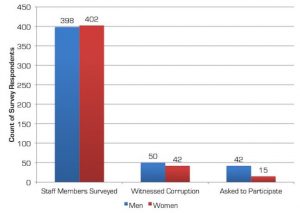 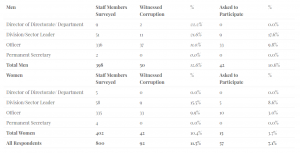 There are several interesting observations that can be made from the statistics in Table 1:

Based on the above observations, a conclusion that can be drawn is that women appear to be significantly less likely to be asked to participate in corruption than their male counterparts, even when they make it to leadership positions. Whether this is a form of exclusion, or because women are perceived to be less corrupt in general is unclear. The UNDP report touches on a possible reason for this discrepancy (emphasis mine):

“Some scholars have suggested that women and men relate to corruption differently due to differences in risk-taking behaviour. It is hypothesized that women’s particular role in society, which entrusts them with the care of children and elders in the family, makes them more averse to risk. Therefore, in professional settings they are less likely to engage in corruption for fear of being caught and losing their jobs. Laboratory corruption experiments confirmed this hypothesis, finding that women tend to react more strongly to the risk of detection.”

There was no question on the survey as to whether women are perceived to be less corrupt, but it was something covered in the focus groups. Again referring to the report (emphasis mine):

“[The men’s focus group] also claimed that men are more inclined to corruptive deeds, due to leadership positions and audacity. According to some of them, women have a perception that corruption is more prevalent because most of the leadersip positions are held by men.”

“The higher representation of men in leadership positions was identified as one of the main reasons for men being more prone and exposed to corruption, whilst women were observed as more risk-averse and therefore more reserved than men to enter into corruption deals.”

In addition to data on witnessing and being asked to participate in corruption, data was also collected on whether or not the incidences above were reported (see Chart 3 and Table 2). 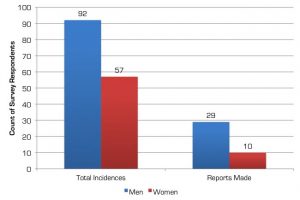 Table 2 – Reporting of Corruption Incidents by Gender and Position 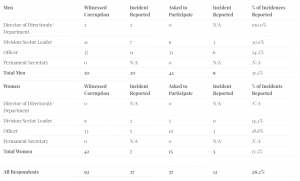 “…men were significantly more likely to report corruption than women.”

The clear observation in this data is that men were significantly more likely to report corruption than women. This trend was particularly stark at the Division/Sector leader level where men reported 10 of the 20 (50%) incidents reported, while women at the same level reported only 2 of 14 (14.3%) incidents. This was picked up in the conclusions of the UNDP report:

Survey respondents were also asked to provide a reason for not reporting corruption (see Chart 4). Although many respondents elected not to provide an answer to this question (responses listed as N/A), fear of retaliation was by some margin the most common reason for not reporting corruption for both men and women, with a belief that the system or reporting does not work featuring as a distant second. Combining these reasons with the aforementioned tendency of women to be more risk averse, we can tell a consistent story as to why lower numbers of women felt confident enough to report incidences of corruption. 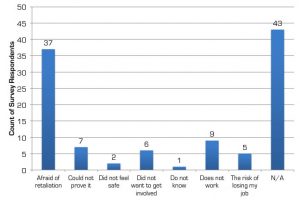 Looking back at the results of the survey, how much support do we find in these results for the idea that higher levels of women in senior positions may have a positive impact on the level of corruption in the Kosovo Civil Service?

The answer is ‘not a lot’ – but that is largely because the survey was not designed to get an answer to that specific question. No data was collected on the gender of the people observed to be conducting the corrupt activities, and even it was, that would only be information about corrupt activities where someone was careless/brazen enough to be observed or ask someone to participate. Complicating that approach further is the fact that men largely outnumber women in positions of power, where the opportunities (and benefits) of undertaking a corrupt activity are greater.

All that said the survey provides one piece of evidence supporting the idea that increasing the number of women in senior positions may help to reduce corruption.

That piece of evidence is the significantly lower percentage of women that reported being asked to participate in corruption. Even in the scenario where women are less likely to be asked to participate in corruption because they are simply being excluded by the men (as opposed to women being generally less corruptible), increasing the number of women in leadership roles is still likely to lead to less corruption (at least in the short run) by disrupting the established old-boy’s networks of corruption that are likely to exist currently.

Although increasing women in senior positions would probably have a positive impact on reducing corruption, there is evidence in the survey data that would appear to indicate a more material way to reduce corruption. That evidence is the relatively low rate of reporting of corruption observed for both men and women, and the fact that fear of retaliation was the most commonly cited reason for not making a report.

Boosting the percentage of people willing to report corruption, particularly women, works to reduce corruption not only if it results in the punishment or dismissal of those found to be corrupt, but also through acting as a deterrent to those who may have been considering it, if such reports result in enforcement action. More generally, providing for official, transparent and reliable reporting structures also helps to reduce corruption through improving the culture and professionalism of an organization and increasing the confidence employees have in management. Some example measures undertaken in the civil services of other countries to improve the willingness of employees to report corruption include:

Many/all of these measures may already be in place in Kosovo, in which case more data may be required to further drill down into why people are not willing to report corruption and how their concerns could be alleviated. In fact, as per Open Data Kosovo’s broader mission, we would generally encourage the Kosovo Civil Service to explore ways in which they could collect and release more data publically to increase transparency and combat corruption. Recent developments in Slovakia provide a great example of the positive benefits this approach can bring.

On that note, we’ll leave the final word to the UNDP:

“Even though a positive trend in managing corruption by the managerial structures was acknowledged, an overall need to support individuals that are willing to report corruption was observed. Overall, low reporting of corruption is related to lack of trust in the judicial system.”