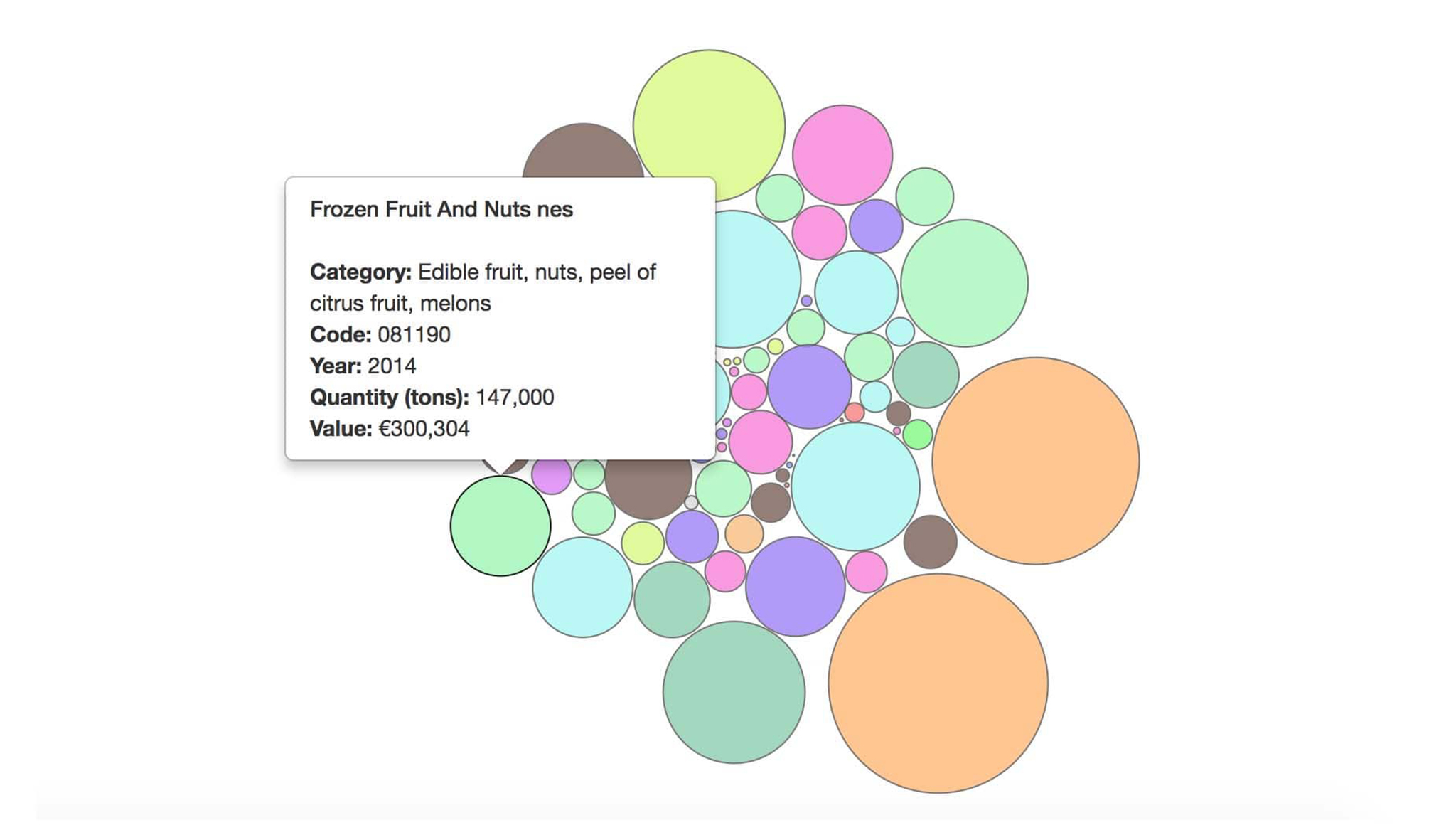 RASPBERRIES AND RAWHIDE – A STORY OF AGRICULTURE IN KOSOVO

Using detailed customs data provided by the Ministry of Agriculture, Forestry and Rural Development, Open Data Kosovo has created an interactive bubble chart. This bubble chart allows you to explore the data by year and assess what products Kosovo is exporting to the EU. 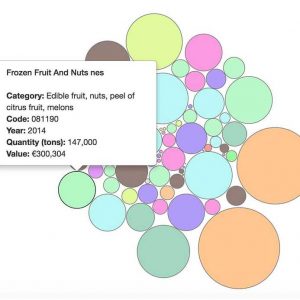 ORIGINAL ARTICLE Depending on the season, Kosovo greets its visitors with kilometers of beautiful green fields, an abundance of wild flowers, and towering lush mountains. In fact, one is struck by the amount of open land, both cultivated and uncultivated, when driving around Kosovo. This article will take a closer at how that cultivated land is being used and provide some interesting insights into the agricultural sector in Kosovo.

Agriculture is an important sector of the Kosovo economy. In 2014, according to data from the Kosovo Agency of Statistics, agriculture was the third[1] largest contributor to Gross Domestic Product (GDP), representing 11.4% of total GDP; or €627 million. Agriculture is also one of the main sources of exports from Kosovo, with exports of food products alone generating some €35 million in revenue for the local economy in 2013 as reported in Green Report 2014 (see source 1 in the notes section below).

However, despite having a large agriculture sector, Kosovo is still a large net importer of almost all food products. Again referring to the Green Report 2014, in the same year as Kosovo exported €35 million in agricultural products, it imported food products worth €584 million, resulting in a large trade imbalance.

Part of the reason for this imbalance is identified in the Green Report 2014:

“Subsidised agricultural products from countries which export to Kosovo are putting local producers in an unfavourable position, who therefore are not able compete with imported products.”

Subsidized agriculture in many high-income nations, especially the US and the European Union, has long been identified as a major cause of poverty in low-income countries (see here for some good discussions on this topic). Often, the subsidies allow farmers in high-income nations to sell their produce for below production cost on world markets, removing the ability of farmers in low-income countries to compete.

Kosovo, like most low-income countries, is affected by this problem, but there is also another issue holding back agriculture in Kosovo. 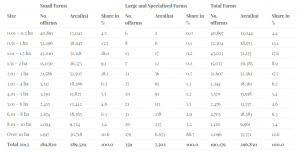 The data shows that 44.0% of farms in Kosovo are less than 2 hectares (ha) in size, while 87.4% are smaller than 10 ha. Overall, the average farm size in Kosovo is just over 1.5 ha. To provide some idea of scale, a piece of land measuring just 1km by 1km would represent 100 ha.

With farms this small, it is very difficult for farmers to compete with larger industrial scale farms in many developed nations – even if we ignore subsidies.

As compared to its neighbors, Kosovo has neither the smallest or largest farm size. Serbia (shown in Chart 2) has an average farm size of more than double that of Kosovo (3.68 ha vs. 1.56 ha) and a significant number of larger farms (24.7% of land under cultivation is held by farms larger than 10 ha vs. 12.6% for Kosovo)[4].

By contrast, Albania (shown in Chart 3) is even more fragmented than Kosovo. The average farm size is just 1.08 ha, and less than 1% of land under cultivation (approximately 900 ha in total) is held by farms with more then 10 ha[5].

Despite the hurdles faced by farmers in Kosovo’s agricultural sector, exports have been growing since the NATO intervention in 1999. According to customs data (see source 2 in the notes section below), the value of commodity exports to the EU grew by almost 300% from €6.0 million in 2008 to over €17 million in 2014. It should be noted this excludes exports to Kosovo’s non-EU member neighbors.

In addition to the above, there are a number of unexpected exports coming out of Kosovo, which are detailed below.

The largest export to the EU by value reported in the customs data was raw cowhides. However, as they are not food products, they were not included in the Green Report 2014 or the Kosovo Agriculture Trade Balance Report 2007-2013. In 2014, rawhide sales generated €8.3 million, or 47.0% of all exports to the EU from Kosovo by value. That percentage, as large as it seems, is also at the lower end for recent years. In 2010, the percentage (by value) of Kosovo’s exports to the EU represented by raw cowhides was 59.8%.

Kosovo has a large supply of wild bilberries. Closely related to the similar looking blueberry, bilberries are much less common due to several traits that make them ill suited for commercial cultivation. Bilberries in Kosovo are harvested almost entirely by hand by villagers in the mountainous areas in which they grow. With the help of the  international community, a series of collection facilities have been set up with refrigeration to ensure that the berries collected stay fresh for export.

In addition to bilberries, feasibility studies have also been conducted looking into the possibility of growing the more common blueberry in Kosovo, but to date, this has not resulted in significant production quantities.

Wild Bilberries in the Parku Malet e Sharrit, near Shtërpcë

The Kosovo Agriculture Trade Balance Report 2007-2013 outlines the growing presence of raspberries in farms around Kosovo. There are estimated to be around 400 hectares of raspberries currently planted in Kosovo, and this is expected to grow to as much as 3,000 ha within 2-3 years.

The advantages of raspberries for Kosovo farmers are numerous and include the relatively high price the fruits earn on export markets, the density of people required to work the raspberry farms, and the large demand for the fruit.

The Kosovo Agriculture Trade Balance Report 2007-2013 estimates 421 tons of raspberries were produced in 2013 for a total export value of €680 million.

Again referencing the customs data, mushrooms were one of the biggest exports to the EU from Kosovo in 2014. However, the mushrooms exported are not part of the common families of mushrooms[6] that one might expect. Details on the specific types of mushrooms being exported from Kosovo are not readily available, but it appears to primarily be a mix of porcini, shiitake and wild forest mushrooms.

Additionally, Kosovo mushroom production may be about to get a significant boost. Hirano Mushroom LLC is nearing completion of production facilities that it claims will make Kosovo the largest producer of Shiitake mushrooms in Europe. If everything goes to plan, Kosovo’s shiitake mushrooms could soon be on the menu at your local Japanese restaurant.

According to the customs data, over 200 tons of mushrooms (189 tons fresh, 26 tons of dried and 18 tons preserved or frozen) were exported, generating €1.5 million in revenue for local business.

Finally, let’s take a look at where the majority of Kosovo’s exports are going. Chart 4 shows the breakdown by country as reported in the Green Report 2014. As expected, the largest export markets for Kosovo are the countries closest to it geographically. Albania, likely due to its ethnic link to Kosovo, is by far the largest recipient of Kosovo’s food product exports.

The numbers from this article are based primarily on three separate sources. These are:

Due to the difference sources of data, there is not always complete agreement, but the broad trends patterns identified below do align reasonably well.